Glossary of Woodworking Terms (for WomenzShed's Introduction to the Wood Workshop)

The sharp edge where two surfaces meet at an angle.

A surface that meets another at an angle other than a right angle or cutting such a surface (see picture).

To drill a hole.

Bend along the length of a piece of sawn timber (as a result of shrinkage).

A 45° bevel along the edge of a piece of wood or to cut such a bevel.

A hammer with a curved claw which provides leverage for pulling nails.

A bend across the width of a piece of wood, usually determined by the orientation of the growth rings.

A high-torque tool used for driving screws and tightening nuts.

The wide surface that’s usually at right angles to the edge of a piece of timber.

To push a work piece in a control manner towards a moving blade or cutter.

A straightedge or device mounted parallel to the saw blade to enable a straight cut to be made.

General direction of the wood fibres. The straw like structures which allowed transport of nutrients up and down the tree.

The rating size of the abrasive material on the sandpaper.  A low grit rating eg 40 is very coarse. A higher grit eg 420 is very fine.

The space between the saw teeth. The tooth tip to the bottom of the gullet is the gullet depth.

Wood cut from broadleaved trees – most of them deciduous – that belong to the botanical group Angiospermae.

To produce the final cutting edge on a blade or cutter (eg chisel) by rubbing it on or with an abrasive stone.

Width of the saw cut removed by the saw blade.

The throwing back of a workpiece towards the machinist by a moving blade or cutter or the action of a power tool when it jumps backwards as a result of its blade or cutter jamming.

Portion of a branch that has been surrounded by subsequent growth of the stem.

Joint formed between two pieces of wood by cutting bevels at the same angle (usually 45°) at the end of both pieces to create a corner. Eg the corners of a picture frame or to cut such a joint (see picture).

Small-diameter hole drilled prior to the insertion of a woodscrew to act as a guide for the thread.

A type of grasping tool used pinch, cut or pull an object.

A type of cut that runs parallel to the wood grain.

Timber cut after felling to rough dimensions with no further treatment.

Wood cut from coniferous trees that belong to the botanical group Gymnospermae. 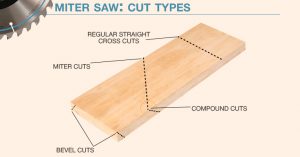